A master data set is a comprehensive listing of the fixed characteristics of the observations that might occur in any other project dataset. Therefore, it contains one entry for each possible observation of a given unit of observation that a research team could ever work with in the project context via sampling, surveying, or otherwise. For example, a household master dataset should include data on all households that the research team ever encountered: households in the analysis, households sampled for surveys, households listed in the census or households that were included in monitoring data despite not being a part of the project. Accordingly, some observations in the master dataset will not have data for all the variables. As long as documented properly, this is normal and okay. In this case, make sure that all missing values in a master dataset are explained using extended missing values; Stata's regular missing values should never be allowed in a final master data set.

Create the master dataset as soon as you begin working with a new unit of observation. This typically happens at one of three moments:

Create a master dataset for all units of observation that fall into any of these categories:

For some units of observations in a dataset, it is not worth creating a dataset. Consider, for example, that all students in a survey belong to a school, school district, region, and country. If this survey was conducted in in a single region, then there is no need to create a master dataset for region and for country, as they would only have one observation each. It is not incorrect to do so, though, in most cases, it is not worth the effort.

Adding to the Master Dataset

Each time you come across new instances of a unit of observation, add them to the master dataset. For example, imagine that a research team has completed baseline patient surveys for a public health project. Between baseline and endline, they monitor whether patients in the clinics received the treatment according to the research design. However, the monitoring team does not have access to the baseline sample and instead simply randomly selects patients at the clinic. When the research team first receives the monitoring data, they should confirm if any of the monitored patients are associated with the baseline using the master dataset. If the master dataset is created correctly, then it already includes all the patients associated with the baseline.

They should then merge all new patient-level monitoring data to the patient master dataset. Then, they should assign the new observations an unused ID. Be very careful when assigning IDs and always check for any errors before proceeding. Make sure to not alter existent IDs. Consider, for example, that if you sort your observations alphabetically before assigning IDs, then the new observations added to your master dataset may alter that alphabetical sort and result in errors. For more information on ID variables, see unused ID Variable Properties.

In the case where you have admin or monitoring data that does not have a numeric ID, you may have to merge using string variables. This process is error prone, so it should always be done carefully and using Master Data Sets. Never merge on a string variable using any other dataset other than the master dataset.

String variables are often not unique across all possible observations. For example, a name might be unique within a village but not across a district or a region. Therefore, it is not always enough to merge on a single string variable, but rather, a combination of string variables. The exact merging procedure for string variables differs between datasets; the more information one has on the data, the easier it is to avoid mistakes in this exercise.

This example do-file shows important steps and useful advice for merging string variables. Note that in a real world scenario, datasets usually require many more corrections than in this example do-file -- especially if the data was collected in a context where the names are written with a script different from the Latin script. When altering strings, be careful not alter them for more observations than you intend to. 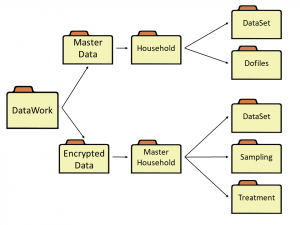 Example of a Master Data Set and Crypted Data folder as set up by command iefolder. (Click to enlarge.)

The Encrypted Data folder, which the iefolder command generates when creating the DataWork folder, should store any identifying or sensitive master datasets, outputs, and do-files. Note that while iefolder creates the Survey Encrypted Data folder, it does not encrypt it. The folder’s contents can easily be encrypted using software like Boxcryptor.

Click here to see pages that link to this topic.