A data flow chart is the third component of using a data map to organize data work within a research team. The final purpose of going through the complex process of collecting or acquiring data is to analyze it. Data flow charts allow the research team to visualize which datasets are needed in order to create the datasets that will finally be used for analysis. They are also a useful tool to communicate to the rest of the team, and document how the analysis datasets, are created using various intermediate datasets

Note - It is important to keep the following points in mind regarding data flow charts:

Given below is an example of a data flow chart for a project that has three rounds of data collection. The unit of observation for this example is the farmer, where the treatment status was randomized at the community level, and treatment take-up was monitored at the farmer level. This example is based on the data linkage table that is provided here. Note that that each starting point in the flow chart below corresponds to an item in the mentioned data linkage table. 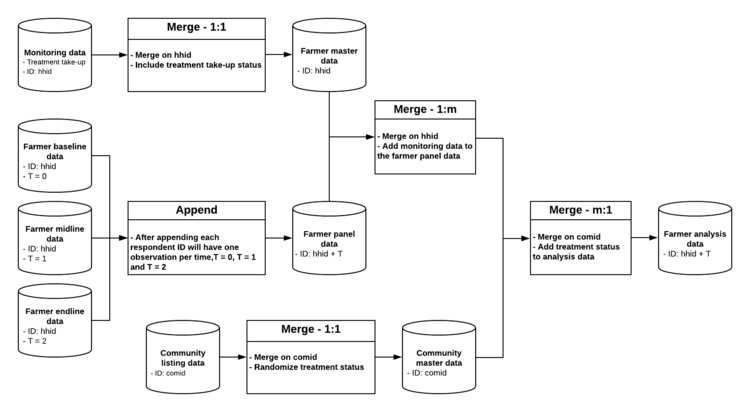 Given below is an explanation of the thinking behind designing an effective data flow chart:

Click here to see pages that link to this topic.